After climbing Mt. Kilimanjaro with me in 2008, my friend Le continued with his travels. He sent me the following photos and text from a visit to South America.


...It was the times of the Chamaj Pacha, the times of flood and darkness. Evil spirits roamed the lands and there seemed no end to the suffering of the world.

Then... Lo! From an island in the middle of crystal lake arose the God Viracocha! Standing on a rock, he commanded the Sun and the Moon to rise, the two primordial energies for all life forces. He then created the first human beings, Mallku Kapac and Mama Ocllo and commanded them to go out and populate the world... Thus they were sent in search of a place for the children of the Sun. The Andean ancestors have since migrated to other places via subterranean canals and settled in rivers, mountains, turning them into sacred centers. In the end, the spirits of the dead will return to their origin at the lake... so goes the Andean mythology.

The rock where the God Viracocha stood is known as 'Titi Khar'ka', meaning 'Rock of the Puma' in the Aymara language as it is in the shape of a Puma, a saced animal representing the world of man in Andean cosmology. Lake Titicaca owns its name from the rock and, naturally, the island where the Sun has risen is called Isla del Sol. 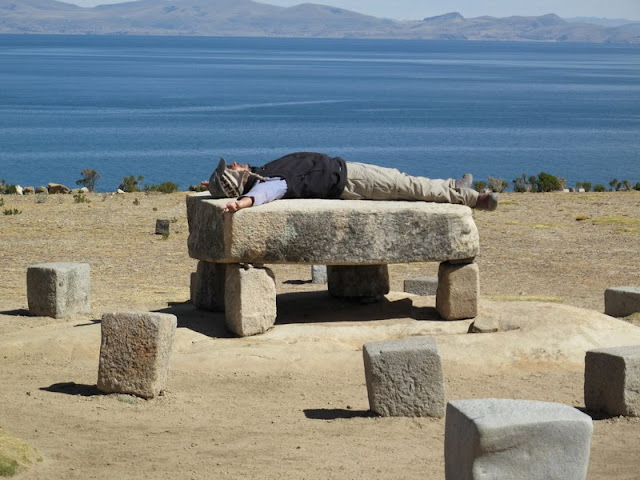 Photo: Le soaks in the sun on a sacrificial relic from the past

Today, Lake Titicaca is often described as the highest navigable lake in the world. It is certainly one of the largest splash of sapphire water body, a gem in the middle of the arid altiplano region. With lots of imagination, visitors to the Isla del Sol can admire the Titi Khar'ka rock, edged with the face of the God Virachocha s well as the shape of the Puma. Numerous pre-Inca and Inca ruins dot the islands on the lake where in ancient times sacrificial ceremonies were supposedly performed.

Not all sites are easily visible. A vast temple structure completely submerged under the lake just north of Isla del Sol was discovered in August 2000. We can only know more about this fantastic Bolivian Atlantis in the near future. No wonder Lake Titicaca is a contender for the new seven natural wonders of the World!

I believe we reached agreement during the 2008 Kilimanjaro climb that if I gain enough experience with mountaineering, we will one day launch an assault on Mt. Everest, at least up to Mount Everest's Base Camp.