This is the sixth of twelve posts on the December 2010 Mt. Kilimanjaro climb.

Jaffar is in good spirits, which is an extremely important character trait ahead of any Kilimanjaro climb. Before we boarded the car he called everyone who was near the car - there were about 15 porters waiting for other clients - and insisted we take a photo together in front of the Land Rover.

﻿﻿
We made our first stop at an equipment rental shop, Gladys Adventure & Safaris to hire extra gear we could not obtain at Zara Tanzania Adventure's Springlands Hotel. Yahoo explained later that a group of over fifty Australian students who were also climbing the mountain, and who were particularly vociferous at night, had depleted Zara's mountain climbing equipment.

When we stopped at the supermarket on the Moshi - Arusha road, one of two policemen on patrol recognized me and later told me he is from Butiama. Later they recognized Jaffar and from their excitement I thought they would have asked for an autograph. They did not.

﻿
It has been raining since yesterday morning and, consequently, the road from Londorossi Gate to the drop-off point at the edge of the forest was so rough and treacherous that we were dropped about 30 minutes' walk from the normal departure point, which we reached at 1600hrs.

Before today, I imagined trekking in the rain presented no extra challenges. I was wrong. The slopes are slippery and physically testing, both on ascents and descents.

Because it was overcast, darkness came quickly and I was the only one who carried a head torch. I had the extra task not only of lighting the path ahead of Yahoo, our guide, but also for Jaffar, in the middle. Furthermore, I also had to light up my own path. It was a case of swinging up for Yahoo, midway for Jaffar, and down at my feet.

At Mti Mkubwa camp I thought I heard Jaffar groaning in pain in his tent, and I feared this year's climb might end early. I was mistaken, because at dinner he seemed fine.

Next: The Seven Hills challenge.

Posted by Madaraka at 19:42 No comments:

If you wish to donate, please follow the instructions on the following link:
http://madarakanyerere.blogspot.com/2010/12/jaffar-amin-has-arrived-in-moshi-for.html

This is the fifth of twelve posts on the December 2010 Mt. Kilimanjaro climb.

Monday 6 December, 2010
The two other members on this year's climb, Mary Kalikawe of Kiroyera Tours and William Rutta of Bukoba Disabled Assistance Group (Budap), who arrived from Arusha today, joined me and Jaffar Amin at Kahawa House for a press conference to publicize the climb. I did not see the articles that emerged from the press conference although someone mentioned seeing the news reports.

﻿
After the press conference we crossed over to the open cafe' opposite Kahawa House for coffee and later dispersed. Mary and William begin their climb tomorrow on the 6-day Marangu route while Jaffar and I will embark on the Lemosho 8-day route. I asked them to check their handset in boxes for text messages so that we could communicate during the climb.

Next: The first day of the climb.

Posted by Madaraka at 02:33 No comments:

Sunday 5 December 2010
In the morning I moved to the Springlands Hotel, the hotel I have used for the two past annual Mwalimu Nyerere/Mt. Kilimanjaro charity climbs. 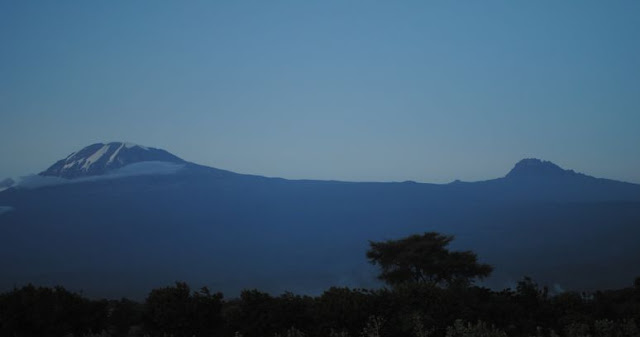 Later I went to the Kilimanjaro International Airport to meet Jaffar Amin who was arriving in the afternoon. He told me he was looking forward to the climb, although he mentioned his concern about his knee joints and mentioned a need for a massage, which he promptly received after he arrived at the hotel.

From the hotel, when the clouds cleared, we saw a clear view of Kilimanjaro, its two peaks Kibo and Mawenzi rising imposingly towards the sky.

Next: The other climbers, Mary Kalikawe and William Rutta, arrive in Moshi

Posted by Madaraka at 22:10 No comments:

I received information on these scholarships offered by the African Union a while ago, but had a large backlog of emails to clear and by the time I reached the email containing this information sent to me by Prof. Sospeter Muhongo, I found out that the deadline for submitting applications is only around the corner: 20th January 2011.

The scholarships are offered under the Mwalimu Nyerere Program of the African Union 2011 Africa-India Capacity Building Scholarship. More details at the AU's website at http://www.africa-union.org/root/au/index/index.htm

Links to this post
Email ThisBlogThis!Share to TwitterShare to FacebookShare to Pinterest
Labels: Mwalimu Julius Kambarage Nyerere, this and that

This is the third of twelve posts on the December 2010 Mt. Kilimanjaro climb.

As I waited for the restoration of electricity to complete an article, I visited an equipment rental shop to pass the time and chat. This is where last year's assistant mountain guide, Ben, is works as a shop assistant.

"Aren't you climbing Kilimanjaro anymore?" I asked him.

He said he is taking time off, adding: "Si mlima uko?" [Isn't the mountain still there?]

This is a variation of a saying that employees of clearing and forwarding companies have been heard saying in Dar es Salaam: "As long as the sea has not dried up, there is always a means of making money."

I talked to the shop manager of my intention to buy climbing gear to avoid the annual equipment rental costs. He told me they regularly buy equipment from climbers who after ascending from Kilimanjaro decide to sell some of their equipment. At other times, he said, guides and porters offer for sale items that are given to them by climbers. In fact, he told me, that same morning a porter had offered a sleeping bag for sale for Shs.25,000/-. The manager said they rent sleeping bags for $US20 per trip.

Links to this post
Email ThisBlogThis!Share to TwitterShare to FacebookShare to Pinterest
Labels: Mt. Kilimanjaro, Mt. Kilimanjaro Climb 2010, this and that
Newer Posts Older Posts Home
Subscribe to: Posts (Atom)