I was in Kampala, Uganda, on 7th October 2010 to receive on behelf of the family of the late Mwalimu Julius Nyerere a plaque from the Pan African Movement that was presented to me by President Yoweri Museveni. 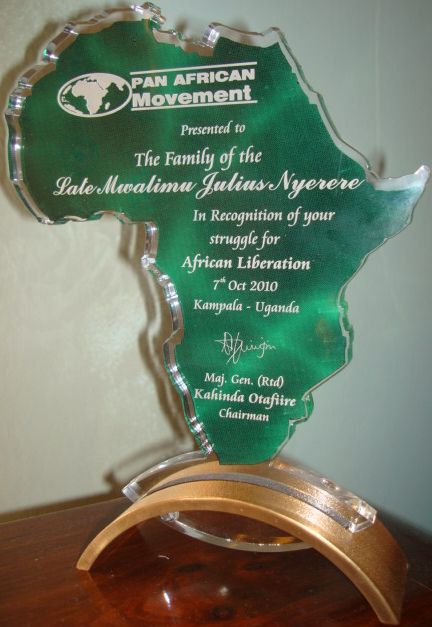 Initially I felt I was receiving undue credit at the Kampala event that perhaps should go to other members of the family until I recalled having participated in a charity event in 1974 that included teaching visitors to the Dar es Salaam International Trade Fair a novel method of multiplication that was invented by the late Lt. Ali Rwegoshora.

From that event we (including some of my siblings and cousins, and Rwegoshora) collected donations for Mozambican orphans whose parents had died in the Mozambican liberation struggle. It wasn't a major contribution towards African Liberation but it was something.
Posted by Madaraka at 18:02

Email ThisBlogThis!Share to TwitterShare to FacebookShare to Pinterest
Labels: Mwalimu Julius Kambarage Nyerere, this and that