Three years prior to Tanganyika's (later Tanzania) independence in 1961, Mwalimu Julius K. Nyerere, the leader of TANU, the political party that won independence from the British, was charged with committing libel against two District Commissioners of Her Majesty's government.

In an article he wrote and which was published in TANU's publication, "Sauti ya TANU" (the Voice of TANU), issue No.29 of 7th May 1958, Mwalimu Nyerere wrote:

These folks are instigating people to make false depositions in court to implicate TANU....We are not afraid of the law, if the police do not involve themselves in politics and do not adjudicate between law-abiding citizens and jungle governors who pretend that they are above the law....The motive for these madmen in provoking people to cause trouble is that we will not fail if we follow the law....

In his defense, TANU paid for the services of a famous British barrister, D.N. Pritt, who had earlier defended the Mau Mau fighters in Kenya. Pritt was assisted by two Tanzanian lawyers, Mahamoud Rattansey, and K.L. Jhaveri. 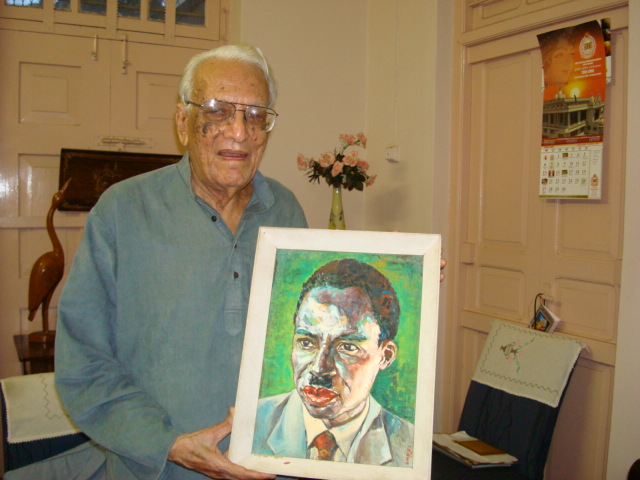 I met Mzee Jhaveri (pictured in the photo above), who now lives in India with his wife Urmila, a few years ago in Dar es Salaam. He gave me two items: the robe he wore in court in that famous 1958 case, and a painting of a young Mwalimu Nyerere that he bought from an artist in Dar es Salaam in the early sixties.

Mwalimu Nyerere lost the case and paid a fine of three thousand shillings.
Posted by Madaraka at 13:54

this is great. do you think you could scan that painting i am in love with it!

Kathleen, I will have to dismantle the entire frame to make a scan. I have been planning to make some postcards; perhaps I will also make one of this painting once plans are ready.